I spent the evening at Tucker’s house… making pizza! So, of course, I’m posting a recipe because I have nothing more than a recipe to say other than the fact that it was delicious. SO… we began with dough his mother purchased. We rolled it out… well, actually, Tucker did it his own way. 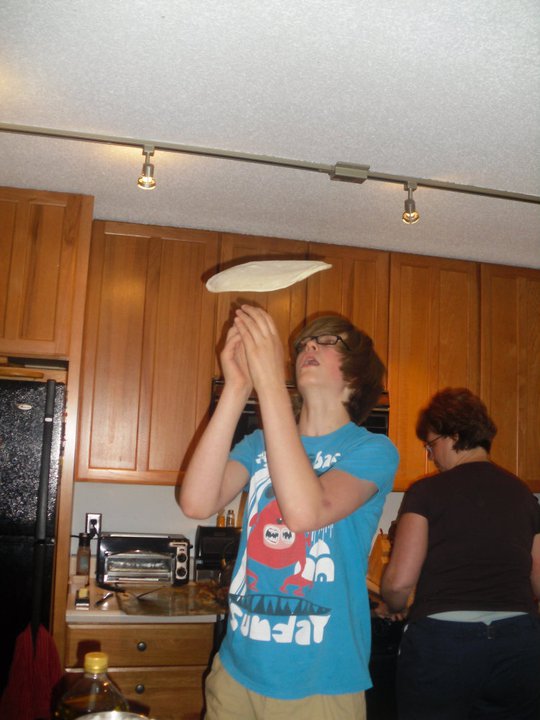 Tucker likes to throw things in the air.

Magic, really. I could never do that! Anyways, meanwhile, preheat the oven to 425 degrees. After the dough is all happy, put a little olive oil on it, or EVOO as Rachel Ray would say.

After that we made the sauce! Basically you put ripe tomatoes in boiling water for 30 seconds, and then put them in ice water. This makes the skin start to peel off. Then, peel them, cut them up, put ’em in a food processor, viola! Put that in a saucepan with some garlic, oregano, basil, salt, pepper, and you’ll probably end up with something good. Just a little bit of everything! I would also suggest putting in either browned hamburger, or browned onions… or both! It would all be good. Simmer in the saucepan for 30 minutes (or until it seems good enough haha.)

This is what it's supposed to look like... we think.

THEN put the sauce on the pizza, duh. C’mon guys, keep up. After that, it’s pretty much up to you. Put whatever you want on it! We did pepperoni, canadian bacon, a browned onion/mushroom mix of deliciousness, and a lot of cheese. We used a variety of cheeses too, which was very good. Here’s what it looked like before we cooked it.

Yes, it was good. Cook the pizza (at 425!) for 12-15 minutes. Maybe a little longer, depending on how thick the crust is. Whenever the cheese is lightly browned and the crust is all the way cooked.

Ours turned out fantastic. How did yours?

We had some extra dough, so we also made a desert pizza… which was DELICIOUS. Tucker had made these as a kid… and I can understand why! Yum yum yum.

Same dough, roll it out… except roll it out more. And a little more. Almost paper thin! Thinner than a slice of pepperoni. Ridiculous, yet very good.  I promise! Also, all the same keep the oven at 425 degrees. THEN, use chocolate sauce as the “pizza sauce.” His mom made some homemade!

Homemade is the best. Yay moms.

Don’t judge the weird shape of the pizza. We’re not good at rolling it out. Shhh.

Then, cover it with caramel. Finally, cut marshmallows for “pepperoni.” I suggest using scissors, it worked the best for us. Put these on the pizza!

I love chocolate. And caramel. And marshmallows. This really can't go wrong.

Cook the concoction for about 12 minutes, maybe a little longer. The crust should be cooked all the way through and the marshmallows should be lightly toasted brown.

I want some now.

This was so absolutely delicious. Serve with a mini scoop of ice cream and perhaps some whipped cream. I rolled mine into a kind of taco. Desert taco-pizza? Yuss. Anyways, it was very good. I would suggest these for everyone.

That is all, goodnight then!